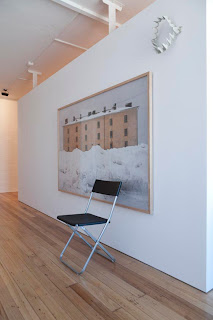 I was under a constraint, against which I had not entirely given up struggling, so I made a demonstration against it by forgetting. Sigmund Freud
‘HEVY’, the title of an exhibition at Conical, is missing an ‘a’. Freud in Forgetting of Intention discusses the repetition of forgetting: forgetting to pay a doctor, forgetting to return a book, forgetting to buy blotting paper, forgetting to meet a lover and synonymous to this exhibition in a Freudian pun sort of way – forgetting to post the letter. The reasons, he puts forward, are that these acts of forgetting speak of one’s unavowed counter-will. The missing letter ‘a’ seems an aberration. However in being that, it acts as a salute to the counter-will that challenges the heavy weighted constraints of obligation and purpose. The works in this exhibition also evoke the existential absurdity of searching for a deeper meaning or interpretations of such eternal repetition.
The first works we see in the exhibition are by Sanja Pahoki and Simon Horsburgh. Pahoki’s is a photograph of a cream apartment building that has snow piled high all around it and a fold out black chair directly in front of the photograph. Horsburgh’s work is a set shark jaws made from egg cartons that hang on the top right  of the wall from the photograph. Pahoki’s work evokes the heaviness of domestic obligation and the desire to escape it. A little sail boat in the window of the bottom floor apartment reminds us of imaginative child-play. Like the suggested attendant who has escaped staring at the walls of white from this black chair, the child in the house can escape the banality of indoors by playing out adventures. Horburgh’s shark jaws made of egg cartons seem a combination of cold day craft and the trophies brought back from fishing trips. Together they seem to suggest that the triumphant return to the home is a necessary part of the daydream. The malevolence of open shark jaws reminds the viewer of the heavy risks one faces if they decided to throw it all in. 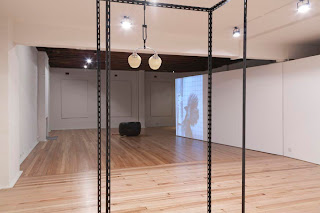 There is a looped video of a bird that runs up a horizontal track up a wall in Lani Seligman’s work. The bird seems to have forgotten its wings and is compelled by some sort of irrational counter-will to endlessly repeat the path up the wall. It is distressing – like a bird in a classroom that keeps banging its head into the window to try and escape. It can seem that despite all our free will, here depicted in an emblem of freedom – the bird, we continue to compulsively repeat. Repetition becomes absurd when we realise there is no sense of progression being made. Like Sisyphus with his boulder or the looped thud of the medicine ball that we hear from another work, the impact of the weight comes in two directions – the labour of rolling, waiting, running up a wall and the heavy realisation of the meaninglessness of the task. It is the actual missing weight of purpose that makes the superficial lightness seem so futile. 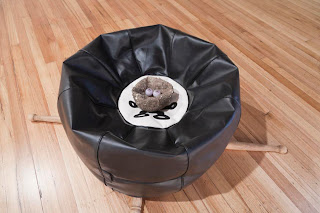 In another bird work, Kiron Robinson’s work, there is a television screen imbedded in the floor and we look down on a video of a little bird who is perhaps convalescing in a box. The box is filled with bread and bird poo and the poor bird seems terrified, huddled in a corner. In this flightless bird we read that it is the burden of security, routine and care from others that add weight.
In Seligman’s other work a black heavy medicine ball thuds into a concrete corner, like the call for exercise in a prison yard. Like the birds, the balls potential for flight becomes metaphoric for a certain paradox of the notion of freedom and lightness. This ball is not one to be volleyed or dunked in a game of sport with winners and losers, arbitrary boundaries and specific ways it can or cannot be handled. The weight of no rules is heavy.
Lou Hubbard creates a sunken heavy Crumpler bean bag creature from found objects. The face is made with novelty eyeballs and a punctured grimy soccer ball. It has baseball bat limbs that connote the sort of striking or infliction made to deflate these round, once more buoyant spheres. The sunken in bean bag, implies the weight of being sat on. The soccer ball shares a similar fate, though we imagine it being waterlogged under a car, waiting to be squashed. When we step back the little creature forms a Jolly Rodger, the pirate flag associated with fighting to the death. In Hubbard’s closet work, two blacked out light bulbs hung over a closet looking frame make eyes that evoke dark depths of deadness, but like the Jolly Roger, there is something quite caricatured and friendly in this uncanny collection of useless found objects. They defy the pity that their heavy, junky uselessness could evoke and smile at their new found meaning and purpose as Duchampian like poetry. 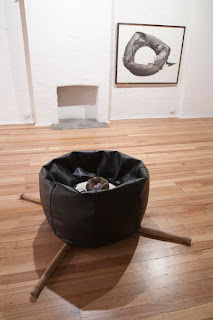 The busted up tyre image by Simon Horsburgh on the wall opposite does not share the chutzpah of the cheeky Hubbard ready-mades. It depicts an object heavy with the weight of being pure junk. Useless and yet not destroyed, the tyre is heavy with the inability to function. It can’t be rolled away. An object that once enabled others to move, an object so essential it has been acclaimed as an intrinsic invention in the history of human progress, will now be picked up and carried, with resentment. This work evokes the heaviness of ‘being a burden’ and the sadness of existing in a state of eternal disrepair.
An analyst searches for the meaning of why one would forget to post a letter. They would look at the constraints associated with this obligation and why a counter-will has emerged to challenge the conscious intentions of this simple act. In this exhibition, the works play with our expectations of what the constraints actually are. It seems often that the absence of purpose, a futile search for meaning and heavy awareness of the comic absurdity of it all can be the greatest of burdens.
Anna
Photos: Christo Crocker. Courtesy of Conical & the artists.
Posted by Inkblot at 7:07 PM