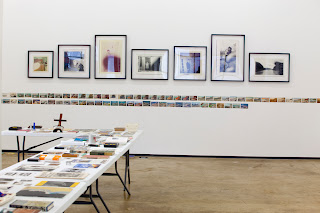 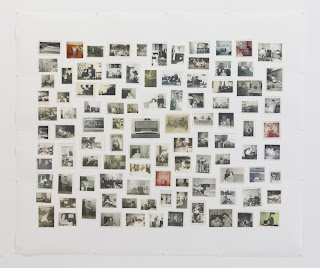 In the collections of found photographs we search for a common link. In one series all the people have the wind blowing their clothes. In another they are all listening to music. These two collections show us how the key factor in all these photos, the punch line, is in fact invisible and only understood by what is around it. The intensity of the wind is shown by how it affects the hair and clothes of the people. The type of music playing is shown by how the people in the photos interact with their radio—dancing, lying down, working on something else. By the repetition of the blowing clothes as a metonym for wind, or the radio as a metonym for music we become aware of how we make meaning by associations. The very nature of collage makes a search for meaning in the relationships between images. The viewer looks for the cohesion that is made by the empty spaces. Pound’s work makes us aware of how we understand the world around us not necessarily through what is shown but in the space in between. 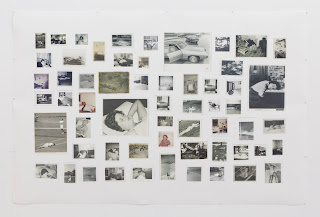 In another collection of photographs, Pound shows us People who look dead but (probably) aren’t. In this collage the invisible breath and heartbeat of the sleeping, resting people seems initially the invisible factor that we are looking for. We soon realise that it’s impossible to prove if these people are alive or asleep from the photograph. We become aware that what we really need to search for is a sense of the character of the unseen photographer in order to try and work out if these people are alive. Do these photographs reveal their ghoulish or just cheeky interests in stealing these private (or perhaps morbid) moments of the people? So it is not just the search for breath that we become aware of, but also a sense of the other half of the room—the missing space; the other side of the camera where the photographer stands and shoots. 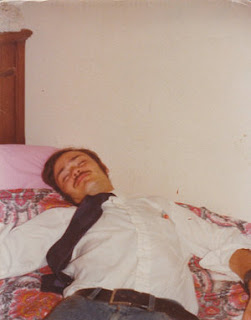 Several works deal with the paradoxical presence and absence of the photographer. In one collection all the people photographed have cameras. These people have the potential to take photos of the photographer who we are not able to see. This gives us a sense of the missing half of this reality presented to us. The viewer becomes aware that the photograph is just a tiny square in the photographer’s full panoramic landscape. Photographs tell a subjective story of the events of a place and time and of the interests of the photographer. Yet that person who presses down the button is necessarily absent from the moment that is being recorded. They are the missing space that holds all the meaning of the image. 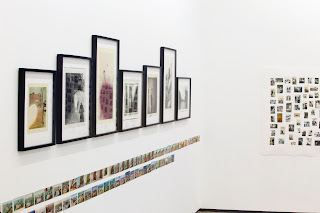 In the collage The Photographer’s Shadow and a series of larger photographs entitled The Photographer’s Hand we sense that the people on the other end of these cameras haven’t quite succumbed to the notion that they can’t be in the photo. In the shadow collage, dark photgraphers’ shadows creep up walls and along cut grass and white skirts, encroaching on the smiling subjects’ moments in recorded history. In the larger works it is literal thumbs and fingers that obscure the image intended on being recorded. These crimes of photography, like the smudged finger prints of a crime scene, mean the photographer will still remain unknown, but we are aware that he has touched this space. 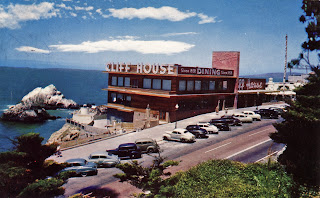 In Building Time (the Cliff House, San Francisco) Pound displays a series of postcards that tell the story of the Cliff House restaurant and its repeated fire, destruction, rebuilding and makeover. The site seems to have an almost Hitchcockian curse in its propensity for strange coincidence. The drama of the architecture in each rebuilding, every one so quintessentially in the style of its time, also reminds us of the vertiginous settings one expects from a thriller. Pound creates a flip-book like animation of the story of the site by placing the postcards in a way that shows us the time passing and the creation and destruction of each new version of the restaurant. This space, like all spaces, is changed by what is around it but in some ways reflects the mortality of the people it encounters more than most. 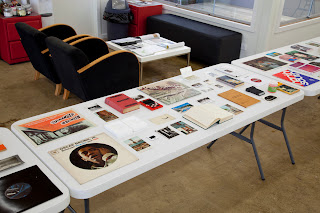 The ultimate tribute to space in this exhibition is The Space Museum. In this work Pound lays out a collection of found objects on white tables. There are records, pictures, books, video games and postcards and each deals with the idea of the pocket, the void, the gap, the place over there or the spot in between. One is two pictures of a man leaping the chasm between cliffs, another is a tape titled 5th Dimension/Individually and Collectively, a novel titled Between Man and Man, a relief map of Australia,  a University thesis titled Parking Spaces for Cars Assessing the Demand, a hand held computer game called Space Attack. Like the photographic collages, we are drawn to the variations of the conceptual elements that seem only to be defined by what is around them. It is the space between things, like the gaps between words on a page that make meaning. 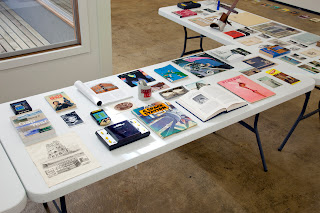 The space in the ‘dad-joke’ is like a gap between meaning and form that only becomes apparent when dad takes advantage of the sound of the word rather than its meaning. Pound takes advantage of the obvious thing in the image that hasn’t been captured visually. He also considers how what is not captured visually can create patterns when repeated again and again—so we can see space, wind, breath only by what is inferred. We can only see the photographer when he obscures the image he is photographing. Yet, Pound, in his collections of photographs and objects has embarked on capturing the uncatchable. The exhibition resonates with a Dadaistic poetry, humour and absurdity. Pound shows us that we understand what we see by what we don’t see and that empty space is the place of tension and meaning.

Fehily Contemporary
Anna
Posted by Inkblot at 4:38 AM