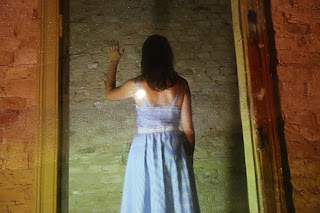 We enter Hermione Merry and Henriette Kassay-Schuster’s Palace of Tears through a dark confined corridor that feels like a secret doorway. We see two projections on a double sided screen, back to back, that make like a wall that we walk around. The two images refract through the screen and appear on the opposite walls. The two sides of the screen have similar images. The image on each side is a different woman in a blue dress in the internal doorway of a brick building. The doorway dramatically frames them like a proscenium arch. Everything seems the same in both images except for the different blue dressed women. They are waving, sometimes with eyes opened and sometimes closed. They seem to rotate around and around so when one is facing you the other has their back to you. Above the screen wall are jugs of leaking water, below a tilted mirror and under that, on the floor, is dry concrete mix. The water in the buckets leaks down through the screens, onto the mirror and then drips onto the dry concrete mix below. Melancholy music seems to drip down over the artwork at the pace of the tears that the water seems to represent. 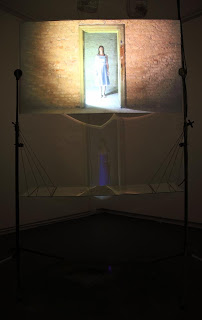 This artwork is highly contextual. The images were filmed in Berlin. The building represents the “Palace of Tears”, which was a customs house on the Berlin Wall. The people of East and West Berlin were divided from 1961 to 1989 by a wall given names like “Wall of Shame”. The work evokes the sadness of the city divided. The dripping water gives a sense of the individual tears shed in a customs house where people were turned back around and waved muted goodbyes.  Now that the wall has been pulled down, ghosts inhabit this architecture of division. The artwork seems to question how we capture moments in time and how they are passed on. Is there a notion of history where events, like the demolition of the Berlin Wall, close chapters in time? Or are there, rather, multiple projections that constantly permeate and change within the present? This is suggested by the contrast between the translucent paper screen and the tears which damage it as they fall to solidify into concrete. 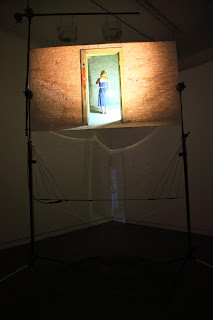 The two women seem to mirror one another much like the two-heads of the Roman god Janus—the god of beginnings, transitions, gates and doorways. As the god of these passages he is simultaneously looking at the future and the past while stepping through the present. The circular movement of the women around the doorway is not unlike a clock that measures the present, on an eternal threshold to the next minute. When the projection stops and turns to black it is more than a blink, it is like sleep or pause before we are conscious again of time circling. So we are presented with both an objective and subjective understanding of the passage of time as something that we continually objectively move through and yet are always subjectively in the one threshold of every moment. 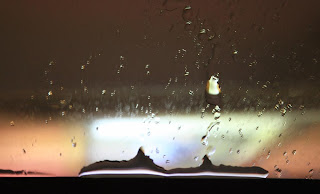 In Palace of Tears the tears shed in suffering drip down but are not dissolved, absorbed and wiped away. The notion of a palace evokes a sense of excess. These tears are beading, brimming, dripping down to wet the concrete mix. The work itself seems to represent a solidification of suffering, suggesting other walls being built. Tears come at an emotional threshold; they tell us something about an internal spilling over that cannot be contained. The blue dressed women tell us how tears flow and repeat. They tell us that past pains and future fears are ultimately always in the passage way of the present—looking forward or back.

Anna Newbold and Tim Alves
at Seventh Gallery
Posted by Inkblot at 4:55 AM